One fun activity to encourage observation and memory was a group running with a coach who followed a pre arranged track (dashed line on blank piece of paper).  Two or three times along the way the group stopped to fix in their minds what they had seen.  At the end of the run a different coach who had not seen the route drew the sketch map from what the running group could remember. (click on map to enlarge)  Then the group led the way back using the sketch map and their memory as a guide. 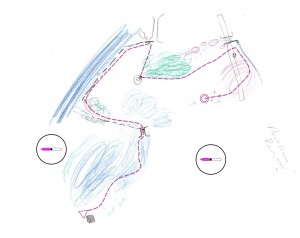 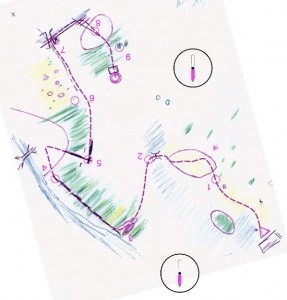 Some weeks later in the dark with headlamps we set out a course using the sketch map and used it to learn how to orient the map with a compass.  Kids in the group took turns leading the way on the different legs of the course.