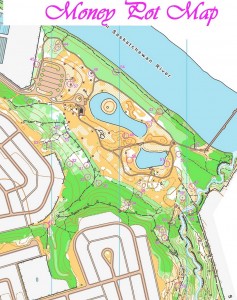 This game worked well in the dark with headlamps and in the daylight.

The blue and yellow teams were each split into three smaller groups based on skill level.  Depending on skill the groups were either on their own, or shadowed by a coach or assisted by a coach.

Each small group carried a punch card to mark with the pin punches at each money-pot (I.O.U.s to be cashed in at the end of the game and used to buy goodies for the team).  They had an over-all time limit of 75 minutes.  Groups could visit money pots in any order, but only once.

After the first 45 minutes, 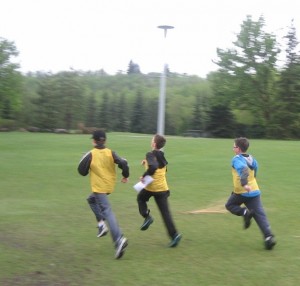 instead of punching when they got to a money-pot the groups collected the pot and brought it in for bonus points at the end of the game.  This meant no points for you if the pot was gone by the time you got there.

For the coaches there was the bonus that there were not many pots left to collect in after the game was finished.  The version in the dark used plastic cups with reflective tape as the money-pots.